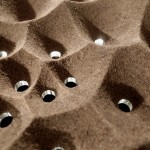 Chapter 5 of The Death of Drawing: Architecture in the Age of Simulation discusses computational design projects that temper simulation with parallel material-based design processes. By incorporating material properties in the design, such processes mitigate a major danger of simulation, that of identifying the computational model with the architecture.

There are three projects illustrated in this gallery. The first, by Shajay Bhooshan and his collaborators is called Learning from Candela. It was presented at the annual meeting of ACADIA in 2012. The project is a concrete shell pavilion in Mexico City, completed in 2012. According to Mr. Bhooshan, the practicalities of construction in this locale played a major role in the design of the project, the capabilities of local builders in particular. It is interesting that the finished object gives the appearance of having been 3D printed, although, as the pictures show, this is far from its actual construction. Perhaps this can be seen as a similar procedure to that used by early Modernists whose vision of mass-produced architecture could not be realized by the technology available at the time. They often used a combination of building techniques, plastered over to give the appearance of an industrially produced structure.

The second project, Terriform, was created by 35 Degree in 2012 and was also presented at the 2012 ACADIA conference. It is an investigation of the constructive possibilities of a material made by mixing sand with salt water, intended for use in the Middle East and other arid areas with plentiful supplies of sand. Two parallel design processes were carried out: one digital, one material. The  forms are the product of the angle of repose of the material (35 degrees, hence the group’s name), placed on a perforated surface to allow light and air to penetrate the structure. The intriguing forms are thus the result both of the properties of the material and the designers’ placement of perforations in the structure.

The final project is the well-known Barclays Center by SHoP Architects. The photos were taken by local photographer David Kutz. This project was taken over by SHoP after an initial design was rejected as too expensive. It’s skin is a virtuoso performance of computational design and fabrication. I included it here both as a demonstration of the effects of a given material (steel panels) on the design, and also as a comment on the limitations of many computationally design projects: a tendency to become absorbed in a fascination with form and fabrication at the expense of other considerations, especially those of urban context. The Barclays Center almost gets away with it due to its unique site, but in order to become a generally viable design method, computational designers need to address building types that are not isolated in one way or another, and must establish meaningful relationships with their contexts.